A cop filmed failing to arrest Kenosha killer Kyle Rittenhouse moments after the teen shot two men dead says he feared there was another active shooter nearby, and that Rittenhouse didn't display a 'surrender' pose.

Officer Pep Moretti testified on the fourth day of the double murder trial that the sound of gunshots during the August 2020 riots in Kenosha, Wisconsin, was of greater concern than Rittenhouse, then 17, walking towards him with his hands up.

Moretti told jurors: 'There was still gunfire erupting around us … so we still thought he was an active threat.'

The clip of Rittenhouse walking towards Moretti's car with his hands up was widely-shared online, sparking fury as to why he wasn't apprehended, and was allowed to travel back home to Illinois afterwards.

But Moretti insisted that Rittenhouse's demeanor was unusual, and that people looking to surrender usually get on their knees. 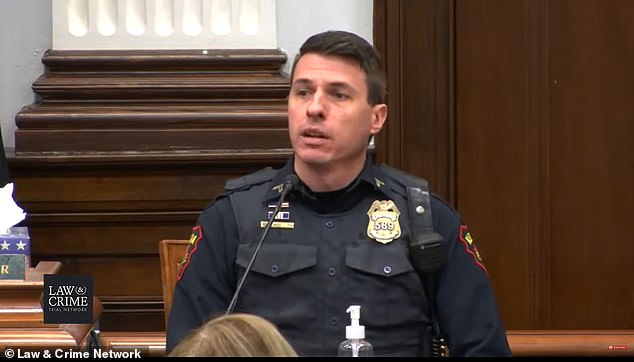 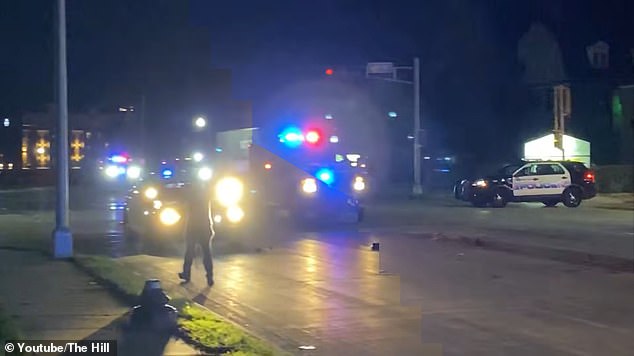 The officer said Rittenhouse walked up to his police car with his hands up, pictured, but the officers were dealing with active gunfire and peppers prayed the teen to get him away

He told the court: 'In my prior experience in law enforcement, when somebody surrenders to us, they will generally put their hands up but they will take the further step and drop to their knees or they will lay in a prone position.

'They’ll usually follow commands when they’re attempting to surrender. Never in my career have I had somebody put their hands up and continue to advance.'

Moretti added that the AR-15 rifle Rittenhouse was toting was not in itself suspicious given that he and his partner had been approached by so many armed individuals during the protests.

'We were surrounded all night, all week. There was probably more people armed with weapons than not throughout that entire course of the civil unrest,' Moretti said.

The officers believed Rittenhouse was yet another armed man trying to volunteer to help officers that night, but he said they grew worried when Rittenhouse continued to approach them armed with an AR-15 rifle.

When Rittenhouse failed to back up, Moretti said his partner pepper-sprayed the teen as gun fire continued to go off in the crowd and the officers grew tense.

'It’s not uncommon for a police officer in this country to be ambushed. And given everything that was taking place, a war zone is the only way I could describe it, Moretti said.

'We were surrounded and the city was burning and on fire.' The Kenosha riots were sparked by the shooting of Jacob Blake, a black man shot seven times after wielding a knife at cops called to reports of a domestic disturbance at his girlfriend's house. 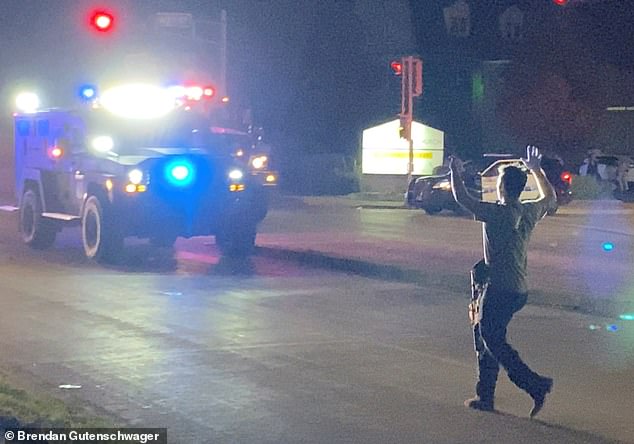 Rittenhouse walked up to police officers after he shoot three people, killing two. Moretti said he did not believe the teen was surrendering because he did not lie flat on the ground

Moretti added that Kenosha officers did not want armed volunteers to help them manage the crowds. He said he and his fellow officers instructed any volunteer to go home.

The officer was the last witness to testify on the fourth day following a heated cross-examination of the family of Anthony Huber, the man Rittenhouse fatally shot after killing Joseph Rosenbaum.

Rittenhouse is accused of gunning down three people with a military-style semi-automatic rifle last year, killing Rosenbaum, 36, and Huber, 26, and injuring Gaige Grosskreutz, 26.

The defense claimed Huber had a violent criminal past in which he assaulted family members, threatened to 'gut his brother like a pig' and to burn down the family home 'with all you f****** in it.'

This is the startling criminal history that Kyle Rittenhouse's defense will try to bring into proceedings should the state push the notion that Huber was a 'peaceable character.'

The jury were not present as defense attorney Corey Chirafisi addressed the judge responding to the state's earlier attempt to paint Huber as 'a hero' during direct examination of Huber's great aunt, Sarah Hughes.

According to the criminal complaints quoted by Chirafisi in one instance, Huber 'hurled a chair,' and armed with a butcher's knife told his brother he would 'gut him like a pig.' 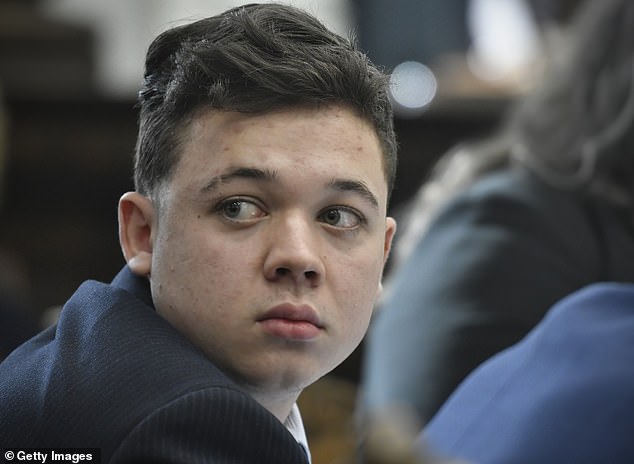 Kyle Rittenhouse is accused of gunning down three people with a military-style semi-automatic rifle last year, killing two and injuring one 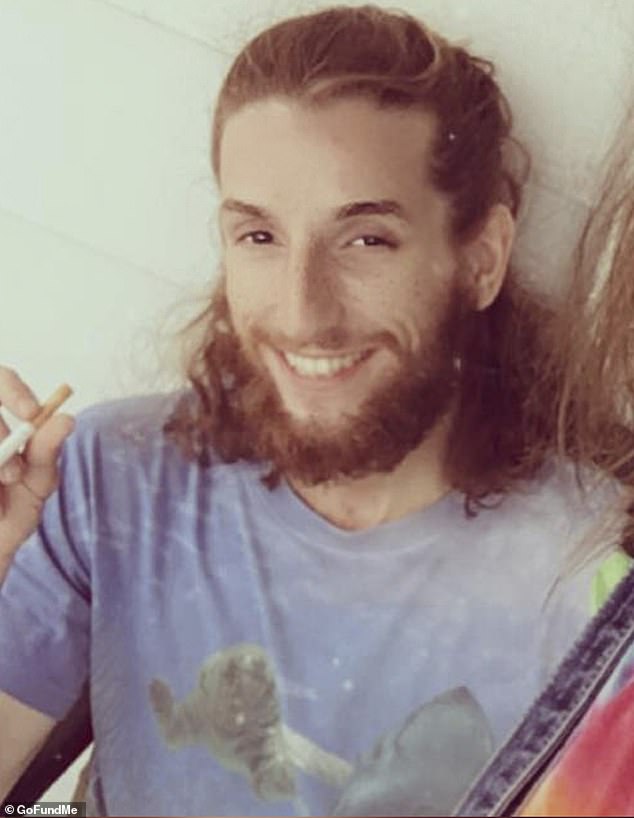 Anthony Huber had a violent criminal past in which he assaulted family members, threatened to 'gut his brother like a pig' and to burn down the family home 'with all you f****** in it.' 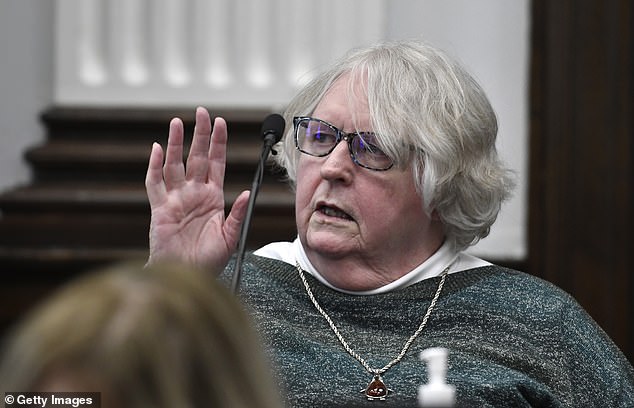 Shortly before breaking for lunch the court heard from Anthony Huber's great aunt, Susan Hughes (pictured) – the first 'spark of life' witness, brought in by the prosecution to humanize the victim

Cop denies treating Kyle Rittenhouse leniently by not arresting him: Says he feared being AMBUSHED by the armed teen who was trying to surrender - so his partner pepper spayed ...

Read Cop denies treating Kyle Rittenhouse leniently by not arresting him: Says he feared being AMBUSHED by the armed teen who was trying to surrender - so his partner pepper spayed ... by Daily Mail